Lady Ginkgo, Smallest Mountain Range in the world, and new fabric - all in the same day!!!

Dear Friends,
I thought it was probably my last day on earth yesterday... so wonderful!
We started out early - he made scrambled eggs for breakfast and off to Colusa we went to hunt Elm Tree seeds. (You don't hear of that very often, do you?) We had seen an Elm across the street from a little quilt shop - now out of business - on a shop hop and had scooped up some seeds to try. I left them go too long, and they didn't work, so we were going back to get some more. (A thing I learned about tree seeds is that they don't stay good for years and years. Some trees have a mechanism to keep competition at a minimum, I guess, and the seeds are only good for a week or so... learned from Wikipedia, I think. Anyway, Elm is one of those kinds of trees.)  All the way there we could see the Smallest Mountain Range in the world... one of my favorite places on earth because it is quiet and  remote - off the beaten freeway and very few houses (although that is changing). We've been there a number of times... well, here, cut to the pictures 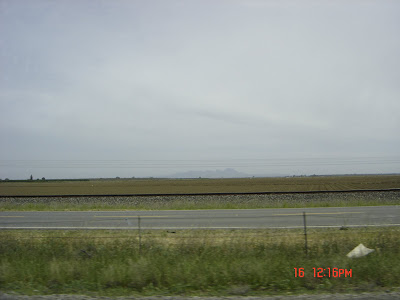 First off - early in the morning (well, not that early - maybe 10ish) the mist hides the mountains.  If you look low on the horizon right in the middle you'll see them.  If I remember right, they are from one of our California volcanoes, probably Lassen, spitting some lava and it landed 200 miles away to form this mountain range! Incredible, isn't it? 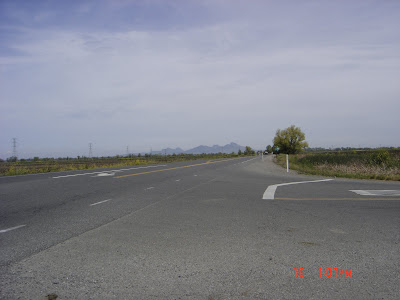 The mist is burning off - really it was a sunny warm day!  You can see the range just left of that tree and about 20 miles in the distance. 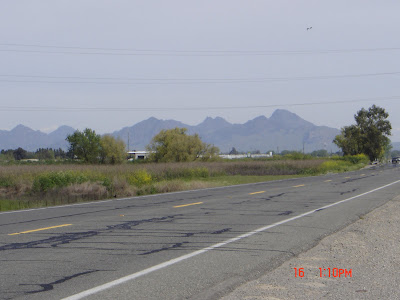 We're getting closer!  Aren't they interesting? 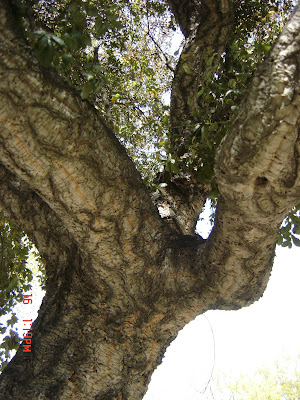 When we got to Colusa we stopped to get us some seeds, and found this Curly Barked Live Oak.  I'm not sure that is the accepted name, but it is descriptive. They are quite rare. The leaf looks like a holly leaf, and the tree is green year round (that's why the Live Oak part).  We found the Elm and picked the seeds, but the best part of the trip -a couple of hundred miles - was the Lady Ginkgo!!!!  I have been wanting Ginkgo seeds - well technically they are pits, but I didn't know that until yesterday.  Since I first learned about the tree being prehistoric, and having male and female trees (not like most trees which are male and female on one tree and usually within one flower!) I have wanted seeds.  The female trees are very rare. I heard about one that is supposed to be in the next town over, but where?  I heard that a certain ethnic group likes to find female trees and takes the fruit for some kind of special dish that they make... The reason the female trees are rare is that the fruit they drop - and judging by the pits we picked yesterday they are like a plum - the fruit of the Gingko is stinky... or so they say.  I've never had the privilege. People find them very offensive, and will cut them down. Finding a female just tickled me pink, and I still am pleased beyond pleased with the find. (I planted 5 Elm as soon as I got home, and 1 Ginkgo, so far.) (Elm are also rare here since the 70s when there was a huge outbreak of Dutch Elm disease and millions died.) 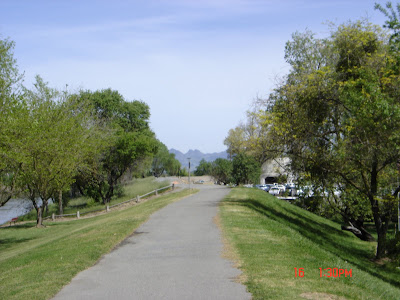 This is a path on top of the levy (across the street from the Ginkgo and Oak) on a stretch of the Sacramento River. It makes a nice little walkway in Colusa, and a park on either side. There was a little old Model T driving on it, but I just couldn't get it to show. Maybe if you click on the pic you can see it down at the end. 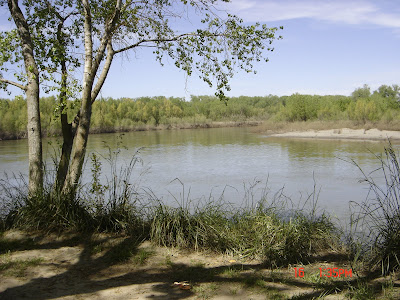 A view of the Sacramento River  You can see that it was quite high from the rains, and has calmed down again.  We still have the runoff from mountain snow melt to come... never know when that will happen. It's later and later every year for the past 8 years or so. Weather has cycles.  If the planet were warming wouldn't the snow melt sooner rather than later? 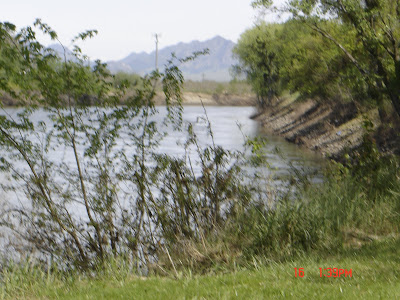 A view of the Sacramento going the other way, towards the little mountains. (These are snowless - just not that tall, and located right in the center of the central valley where the land all around is low elevation, (varies slightly from below 0 at Death Valley! and around there maybe 80 feet above sea level.) and flat like a pancake.)  Central Valley of California used to be an inland sea is why it's so flat! 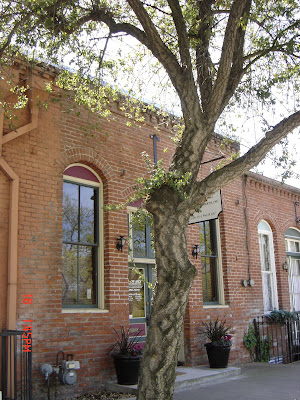 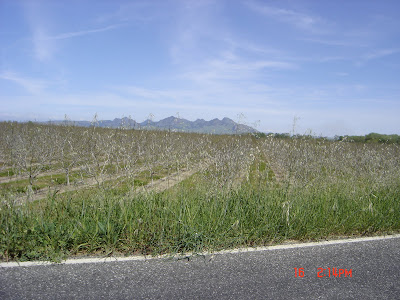 Here they are again. 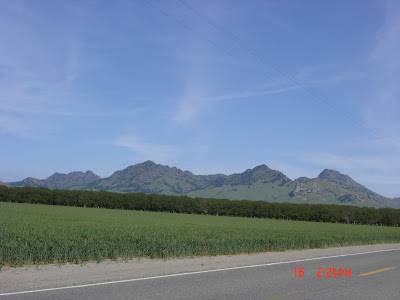 I just wasn't happy with any of the pictures as we took them. (I deleted about 5 other pictures as duplicates.) Even the zoom on my camera can't capture the mountains as we were seeing them.  There are lots of greens and maybe if you click on the picture you'll see what we saw.  They are just beautiful. 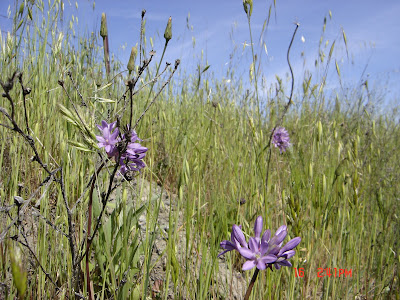 Some Gentian, I think... wild flowers and see our grasses have already matured and are starting to go brown. It's mostly because they started in December to sprout, (when the rainy season started) and have fulfilled their growing season already. 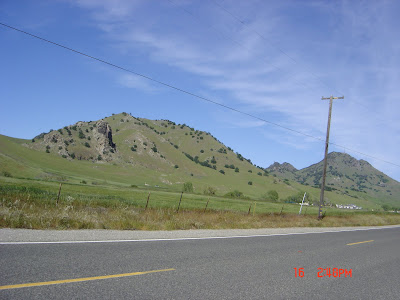 We are close in to the mountains now. No one is allowed to go hiking, well, maybe the residents.  The park service allows only guided hikes 2 times a year... otherwise people here would have ruined them by now. 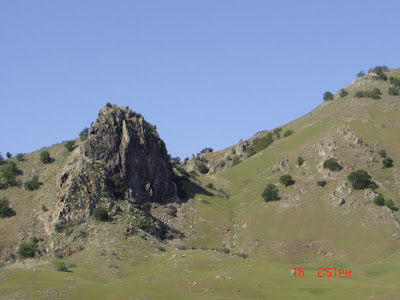 Here is the only unusual feature that can be seen from the road. 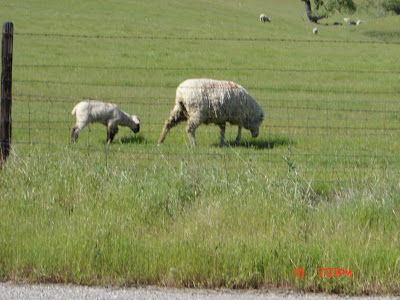 The locals, and some cattle live here and a few humans... that's what I like best, I guess, few humans. 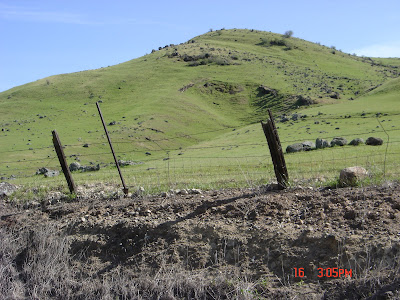 On the other side of the street, rocks. There are lots of those. 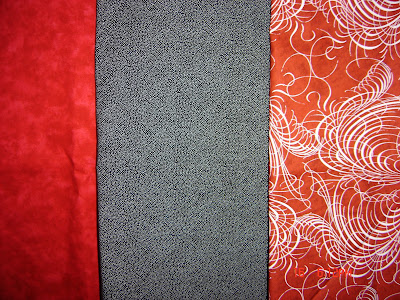 And did I mention there was a fabric shop in Colusa?  A new one that had just opened!  Here's what I bought. Love the red on the right!
What a day!  I haven't had this much (Old Lady) fun in years.  What floats your boat?  What makes you smile?  It does seem strange the things that make one happy.  I've found that even a forced smile - even one shared with a stranger you'll never see again - can make you feel happy... (this is a bit of advise for a certain GD#1). Try to make someone else happy and you'll find it backfires, or boomerangs back to you!  There is an old song - Jimmy Durante sang  it, I think. "Maaaaake someone happy, make just one person happy, and you will be happy, too."  Wisdom in old music. (Read the suggestions from Mother Theresa in my margin.  She was a very loving person who dedicated her life to other people.)  (I have her there because I admire her... and because my name is Theresa and I am a mother, too... so we had something in common. Also, my father-in-law (who is a great grandfather to my grandkids) he believed  he was her twin... he looked like her, and they were born on the same day, so he  jokingly claimed her as his twin.)
I am rambling on today, and I usually don't like that in a blog.  Sorry!  I'll try to have a wordless one next time to make up for this one.
Happy Sunday to you all!
Terri
Posted by Terri at 12:16 PM 4 comments