I've got a couple new HP blocks to show you... 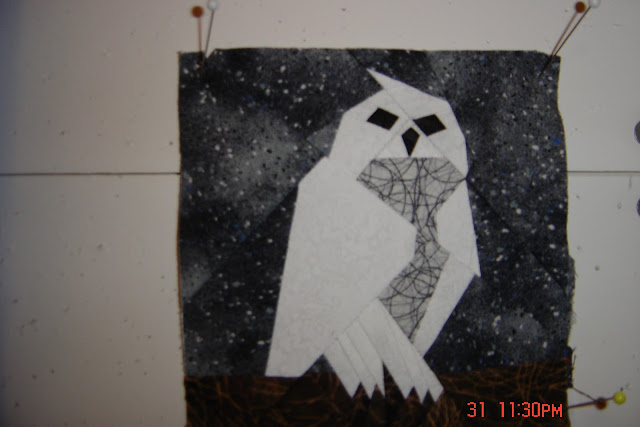 You know who this is.... Hedwig. I made a little mistake on her head, but I see others have made the same mistake, so I don't feel so bad.  I just figure she is in a wind storm, and one of her head feathers it whipping up... 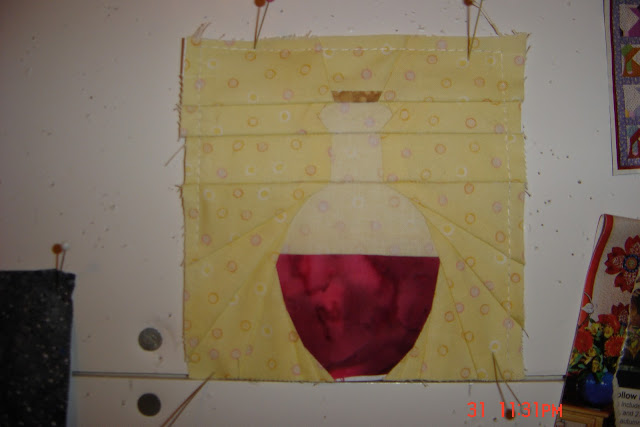 Now this is supposed to be a potion bottle, but I think the potion looks more like a Rose' or Merlot... you know, like wine. Didn't think about that. I just liked the  color with the yellow background. I used the "wrong" side of the background for the glass. Clever, huh? The pattern doesn't address the fact that the cork would show through the glass. Maybe on the next one I'll include that. 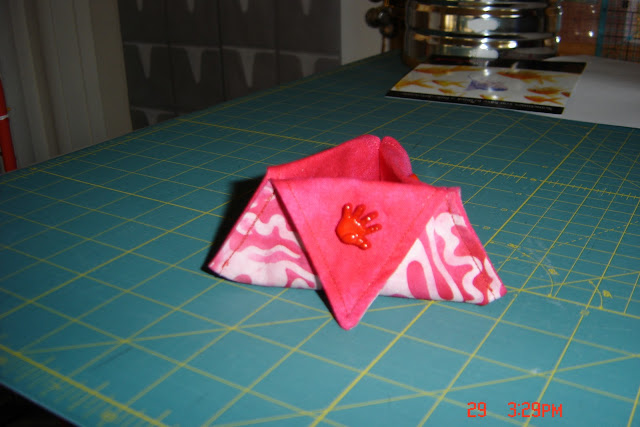 This is the little thread catcher I made. It's just a lined triangle that you sew part way up the sides to form an enclosure. I have different buttons on each side. If you'd like the directions you can find them at Needlingthings where she has a nice  tutorial for you. I'm thinking I'll make them for Valentines to my Grandkids and Daughters. You can use them for little stuff on your dresser. They were easy to make, but I made a mistake on mine the first time... opening got too small.  (Don't sew up the sides too far... only about an inch and 1/4.  I'll have to make the boys' macho fabrics... bugs or fire trucks... then fill with candy. That's the part they like. 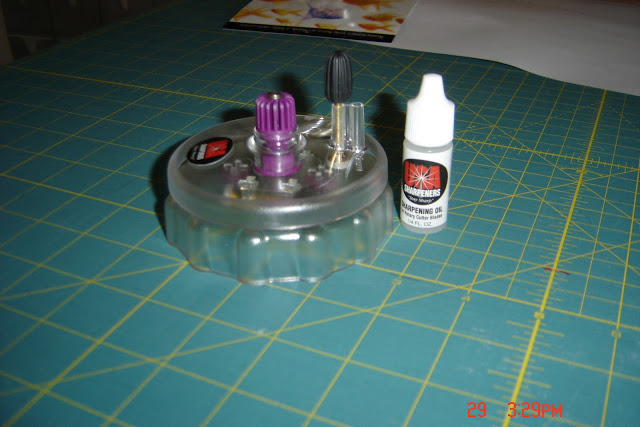 Here's the latest contraption.  I got it as an early Valentine. I like it better than cut flowers, or candy. It's a rotary blade sharpener. (Isn't he romantic?)  I hate to throw away things and buy something you already have.  You don't get ahead that way.  This will serve me well, and save throwing blades. Thanks Honey!
Sew that is it for today. Thanks for stopping by.
Hugs,
Terri
Posted by Terri at 7:04 PM 8 comments

Terri
Superior, WI, United States
Welcome to my blog! I'm the wife of a now retired salesman, Mom of 2 adult sons, and one daughter now an angel in Heaven. Grammy of 9 and Great Grammy of 3- some of them are nearing adult status, too... but I'm not old. I'm the new 40 something. (Can you see my fingers crossed?) I like quilting, starting new plants, rubber stamping cards, making bracelets and lots of other crafts. I believe housework is overrated, so I leave that for special occasions. My favorite holiday is Halloween and I love Harry Potter! (Sounds like True Confessions, doesn't it.)(The picture is from college days... I'm not telling the decade! I did make the sweater vest myself, with an ombre yarn. I've always liked it, but it sure wouldn't fit me anymore!) I hope you enjoy my blog.