A Dragon in my Backyard!

Sorry, no quilting... I've been gardening. Well, potting up snips for Halloween. You've gotta make them early, so they are rooted, and maybe even blooming for the kids. This might be my last year doing this... we are looking at moving to Superior, Wisconsin... Yes - it's cold country, but there we can buy a house that we may be able to live in for free and the tenants pay rent that will pay for our house and utilities. (Otherwise we could easily become street bums.)

Sew there really isn't anything to share - picture wise - except this one and variations... 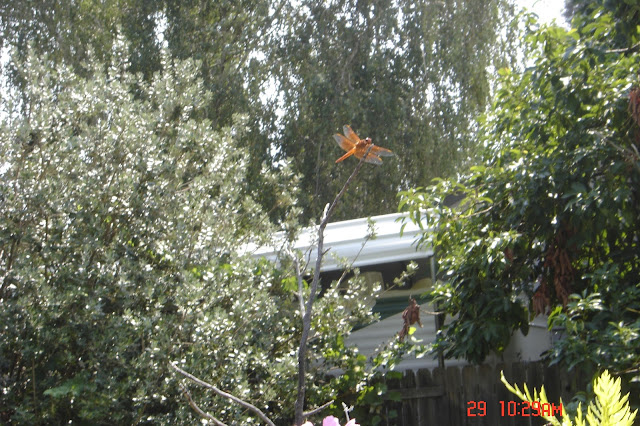 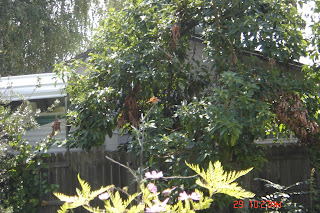 The pot contains the silk oak, and his buddies the Cosmos plants that provide seed to the local Goldfinches. They love the seeds, and took so many last year that there were none for the seed packets for the Trick or Treaters. 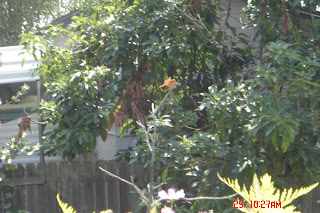 Our Phoebe also sits this perch in the early evening to fly out and capture bugs. 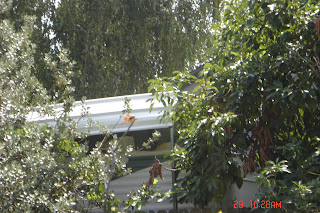 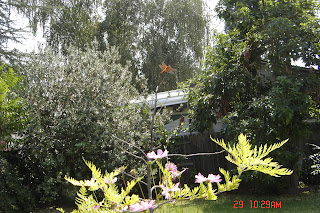 These all are views of my back yard. The bush to the left is a Pineapple Guava, and on the right is one of the 2 Avocado trees I started from pits. We have gotten fruit off of the one, the other is the guardian and gets ruined each year by the frosts. I have made quite a few Avocado trees from the pits left after eating the fruit... and some pits have come from the possum eating  fruit.
Hope you enjoyed the dragon in my backyard. Have a lovely week.
Hugs,
Terri
Posted by Terri at 12:18 PM 8 comments

Now There Are Three

New = Common Blue - I use a sparkly blue for the main part of the wings to simulate iridescence. 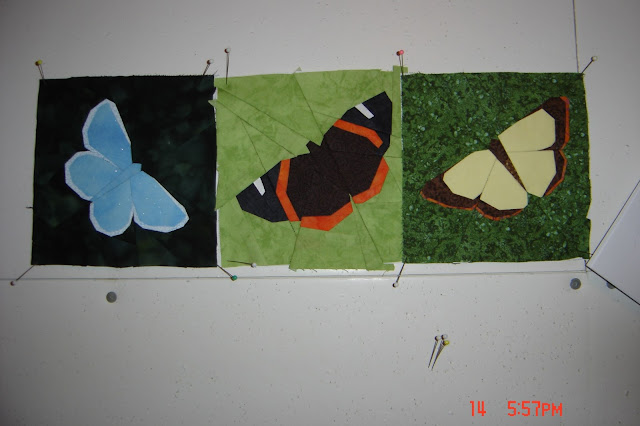 I consider myself at least an intermediate paper piecer, but I had a lot of trouble with this block... It is not the fault of the pattern. It is a relatively easy pattern, but I must have had my mind on other stuff. I'm glad to see that you cannot see where I sewed on the edging along the wings using both sides of the light blue. Once I noticed, I did like the effect, so I left it. I tried out every mistake you can make on this little insect.  You are not going to believe... 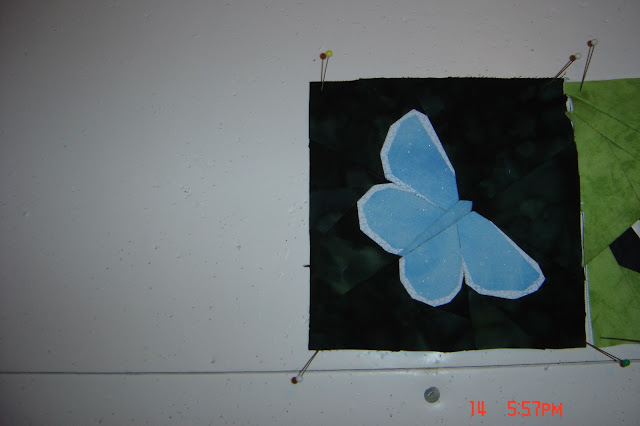 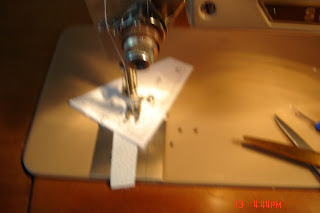 Sorry this is out of focus, but it doesn't matter cause it's a picture of nothing... I put it here to remind me that I actually had to rip out about 10 seams on this one. Several times I sewed out of sequence. (It doesn't matter if its a piece that doesn't touch the next or previous numbered piece, but that was not the case.) I put #1 on then sewed #7, #6 and #5 before I realized what I'd done. Can  you believe it? Even a Kindergartner would know better.  Several removals were because I had inadvertently flipped over some of the fabric before sewing. (That will happen sometimes as you shove the pattern and fabric under the needle to start the seam. I usually run the seam ripper under to make sure that doesn't happen, but I guess I was particularly arrogant yesterday and didn't follow good practices.) Another kind of mistake I made: Not enough seam allowance, and I mean just threads... gotta pick that out and start over. Oh, and the worst mistake... I used the wrong side of the fabric on the #1 spot - in this case not acceptable. I had  to remove 3 pieces once I found the error. (How many words are there to describe  "mistake"?)
Anyway, I'm working on the Peacock Butterfly now. Oh, what a beauty - at least one fabric from every bin... red, 2 blues, yellow, pink, black, 2 browns, and a green for the background. (Something from every bin except the multicolor bin.) It'll take a while - lots of pieces!!!!!! and of course, there will be mistakes and ripping.
Have a lovely week of sewing!
Hugs,
Terri

that's the name on the pattern, which I didn't find in the butterfly field guide, but I did find a Common Sulfur that looks just like the pattern. I used an orange print on the outside edge, but it probably should have been yellow. I like it though. Remember from last post that these are patterns from Claudia's Quilts. I bought 12 patterns for $8.50 USD.  (Just in case you want to make some, too.) Next I'm making the Common Blue - it looks easy! 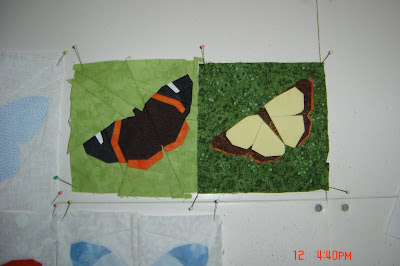 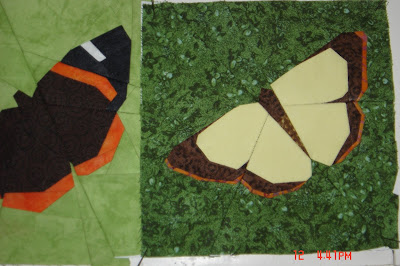 I'm going to link it up to a couple of places.   Can I get a Whoop Whoop, and It's a Party!
Have a wonderful weekend!
Hugs,
Terri
Posted by Terri at 6:11 PM 11 comments

I say first because I think I'll make a bunch of these. 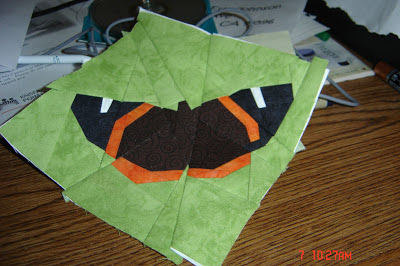 It's one of the 12 patterns I bought a few days ago. There are some spots to embroider on the wing tips yet, and the antennae, of course. In my butterfly ID book there are small black dots on the bottom orange sections that I think I'll add with a pen, and then he's done.

If you want to make some paper pieced butterflies go to Claudia's Quilts and have a look see. I love her other patterns, too.

What do you suppose this is? 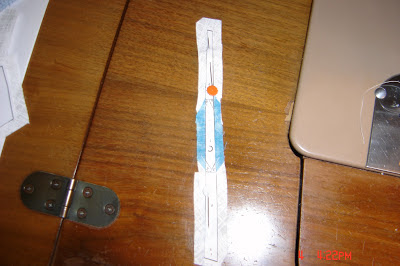 Here's be paper side, and below is the fabric side.... Can you guess what it is? 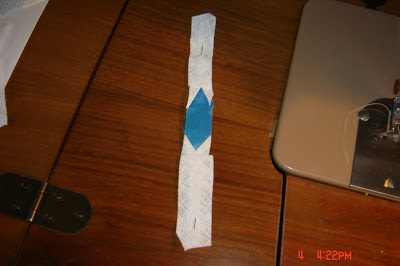 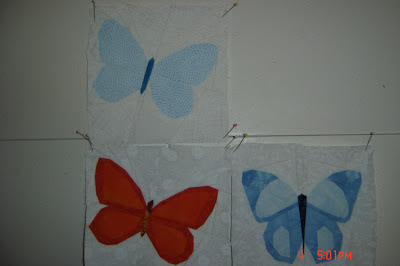 It's the body of the third butterfly. I used the pattern of the orange one, simplified it, and made it blue. There is a closer picture below. 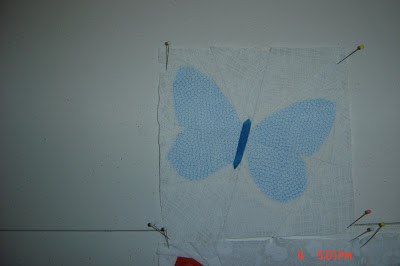 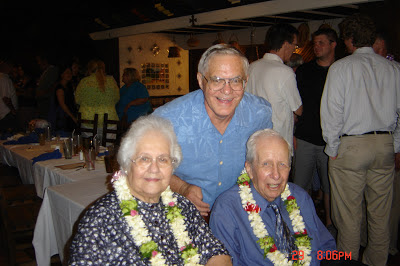 What's on your QBL?

Quilt Bucket List that is.  I saw one from my list at String Thing Along today... a Pineapple Quilt!
I have lots of quilts on my list... and the list keeps on getting bigger. I've always loved the Double Wedding Ring. My Daughter wanted one, but I didn't feel like I was quite qualified to tackle one yet. I wonder if I'll ever get to make one. I keep on starting quilts that aren't on the Bucket List.

I'm still puttsing around with the butterflies. Still no new ones. I don't know what I'm doing all week, but I'm not getting any sewing done. Too much bathing? housework? cooking? No, no and no. Nothing too much there.  I did spend more than a day on blog changing, and for nothing. I still am using the Blog Reader I've always used.

Found an interesting block along this morning... Hasenbach Challenge. Check out this link to see why I was so interested.   Here's a hint from my blog: 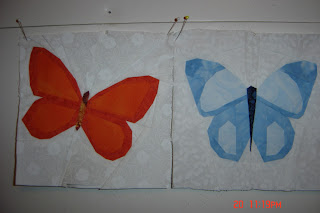 I know you've seen them before, but that's all that I've got made so far. There's a pale blue in the works, but nothing to see... Edit: I went Here and bought 12 butterfly patterns for $8.50 USD... I'll be making some different butterflies soon. (If you are interested, they are on the "all patterns" page click on the quilt with animals, birds, leaves, and trees.)

We did go to Hubby's Cousin's 60th Wedding Anniversary. It was fun...

So I guess I'll go bathe. The Hubs wants to go out to lunch...