It's really easy. The Red Herring Paper Pieced Pattern 2012 is the one I'm using - see the blocks above on my banner.
Here's a link to the pattern:
Quiet Play pattern for Red Herring

I'm still enjoying the sewing, and usually by now I've gotten sick of the pattern. On this pattern make sure that there is more than enough fabric sticking out on the "up" side of the addition as you start to sew. The down side has the extra piece to add as the mid rib so you will put enough there.

More paper pieced blocks and quilts that I've made, that aren't Harry Potter: 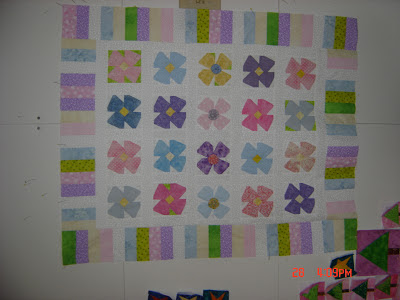 This (above) was a hand drawn paper pieced pattern, but there are lots like it around. Just draw a small square, put a triangle on one point for the center, and background triangles on the three other sides. It takes 4 squares to finish one flower. Then I made strips of the background (white) between them all. "Piano Key" border in the same colors. This one went to Project Linus. 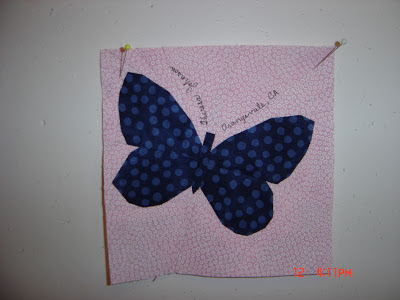 Above is a modified butterfly from 365 Foundation Quilt Blocks, by Linda Causee. It's a very busy pattern, but I just did the wings as one piece each. I also made it smaller than the pattern in the book. This block went to Victoria of Bumble Beans. I signed name and locale as the antennae. 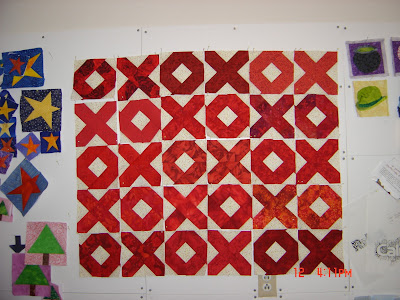 This is the Hugs and Kisses quilt nearly finished. (I made blue hugs and kisses to go around the edge, and have it quilted, but I bogged down at tying the thread ends. This pattern is from either Quilter's Newsletter or QuiltMaker. It is slated for the Hubby for his birthday the end of the month - turning the big 70.
I also see the stars and trees at the left. Those are from QuiltMaker, too, I think. I started that wall hanging for my daughter, but then she said she was so tired of seeing pink everywhere...
I'm going to donate the blocks, I think. It's hard to see them now. 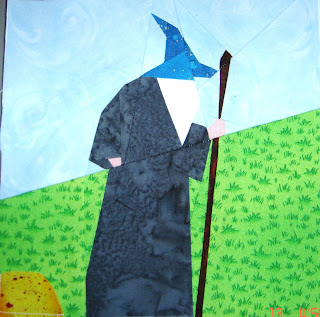 Gandalf. There is a series of blocks about the book, the Hobbit. (There and Back Again (free) patterns from Fandom in Stitches .) I would have made the whole bunch, but block #2 got me. I started out with a wood grain fabric for the coat rack, then realized it would be too hard to handle the "way" of the grain, and there was something else that took priority at the time. Gandalf is still hanging on the design wall. 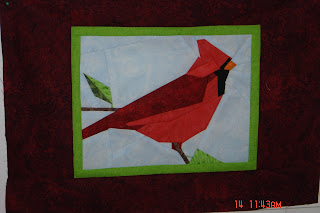 This is a pattern I modified from feathered friends by Jette Norregaard Nielsen. I used the Waxwing pattern and a bird identification book to get the Cardinal I wanted. (They have a similar attitude on the branch, and they are both crested. I had to make quite a few easier adjustments, as well.) This one went to the "Get Your Mrs. Claus On" charity, little dolly blankets for little girls at Christmas. It's run by .Debbie at Stitchin' Therapy. The blankees go with a cradle made by some very talented and generous gents.
So the Hubby wants the computer now... we really should get a second one.
Hugs,
Terri
Posted by Terri at 1:51 PM 6 comments

Terri
Superior, WI, United States
Welcome to my blog! I'm the wife of a now retired salesman, Mom of 2 adult sons, and one daughter now an angel in Heaven. Grammy of 9 and Great Grammy of 3- some of them are nearing adult status, too... but I'm not old. I'm the new 40 something. (Can you see my fingers crossed?) I like quilting, starting new plants, rubber stamping cards, making bracelets and lots of other crafts. I believe housework is overrated, so I leave that for special occasions. My favorite holiday is Halloween and I love Harry Potter! (Sounds like True Confessions, doesn't it.)(The picture is from college days... I'm not telling the decade! I did make the sweater vest myself, with an ombre yarn. I've always liked it, but it sure wouldn't fit me anymore!) I hope you enjoy my blog.