We had a fire at our house this week. You won't believe where it came from.

Remember we are old - having trouble walking, even sitting here is PAINful. And we are trying to sell our home.  So we hired a professional cleaning company to come clean our house for an open house. (I don't know about you, but when I pay $300 for a deep cleaning I want it clean - and I was very disappointed with the results. It was cleaner... but that's not what I paid for.) After they were gone we decided to go grocery shopping and on the way out I opened the oven to see if they'd gotten it clean.... sparks and flames lept up out of the side where the door attaches. I was scared and closed the door up. Hubby opened it again and there were flames again! (Scream) I went for the baking soda and the phone. We fluffed baking soda at the hole where the flames were still glimmering, and got them out of sight. 911 said to get out of the house - they were sending a rig.
As it turns out the professional cleaners had allowed some cleaning fluid into the hole, and that triggered the fire. (I'm still a bit scared - three days since.) The firemen checked for heat with their Thermal something or other and assured that there was no more fire there. The trouble is there are no replacements like it. My oven and stove top are period to this 50s house. I now have to buy a new one... We don't have that kind of money. I thought - no problem - there are places to buy a new oven and top all over the place - maybe $500 each. Guess again. You can't get an oven for less than $1500. (Scream again!) The professional is going to make this right, he said. We'll see. (He did a half-assed job cleaning...)

Back on the sane side of life the D4 is going well... and may even get done on time... if I don 't have another fire.  Here are the latest pictures. 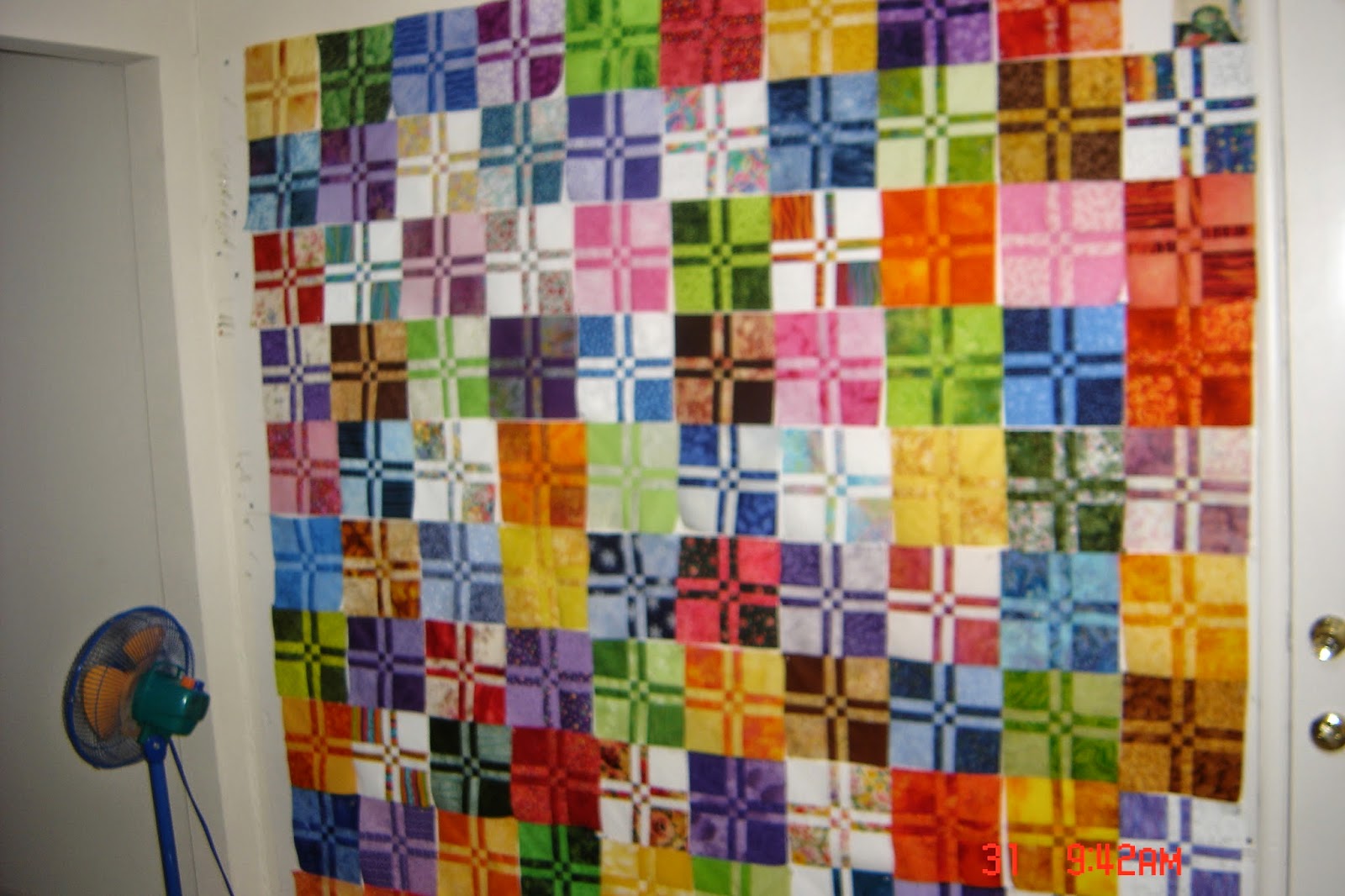 As it is right now... still more blocks in the works. 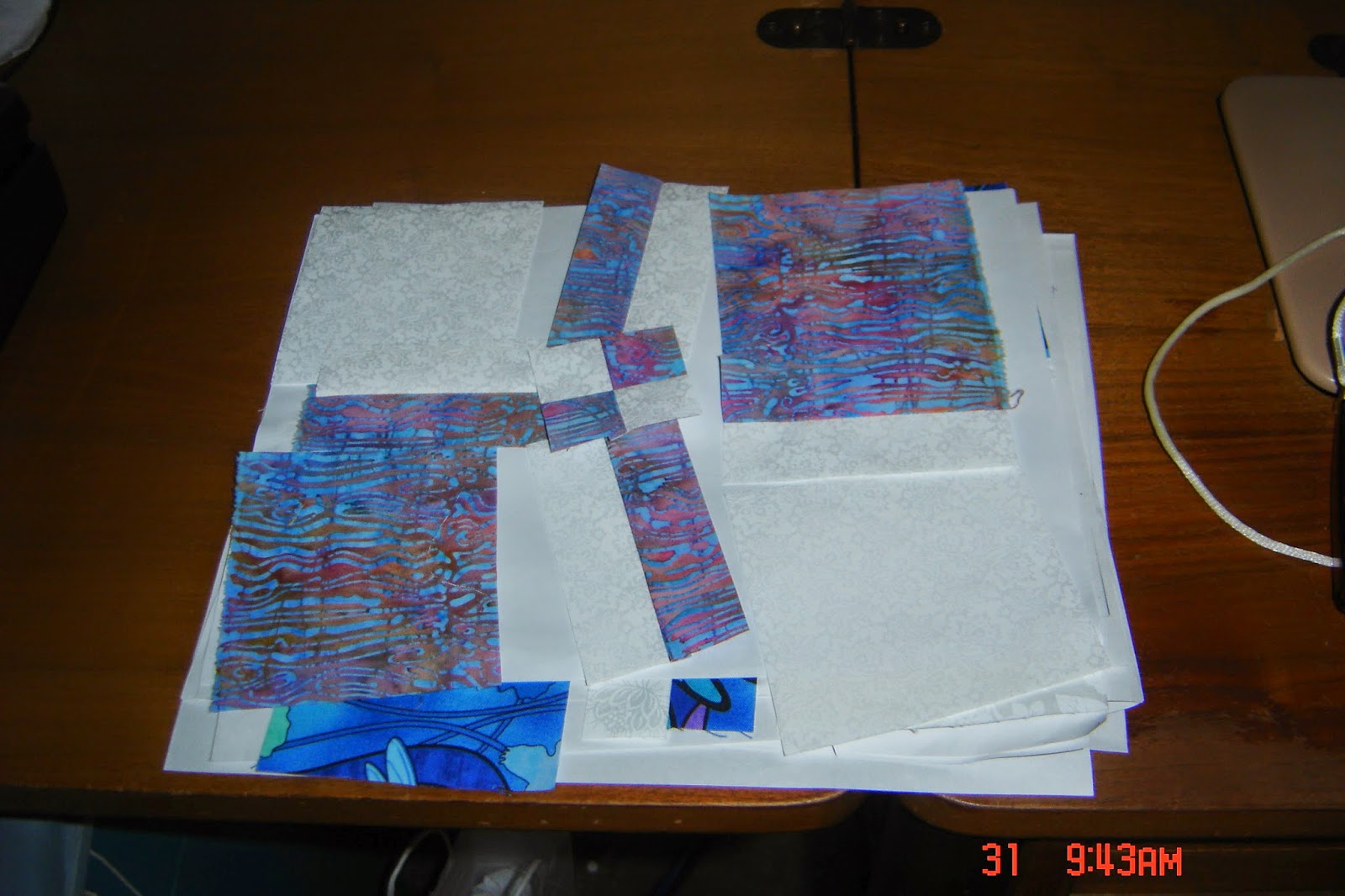 Waiting for the resew after the disappearing cuts. Don't you love that print. The pieces are held on a piece of paper until I can get them resewn. There are two blocks here. 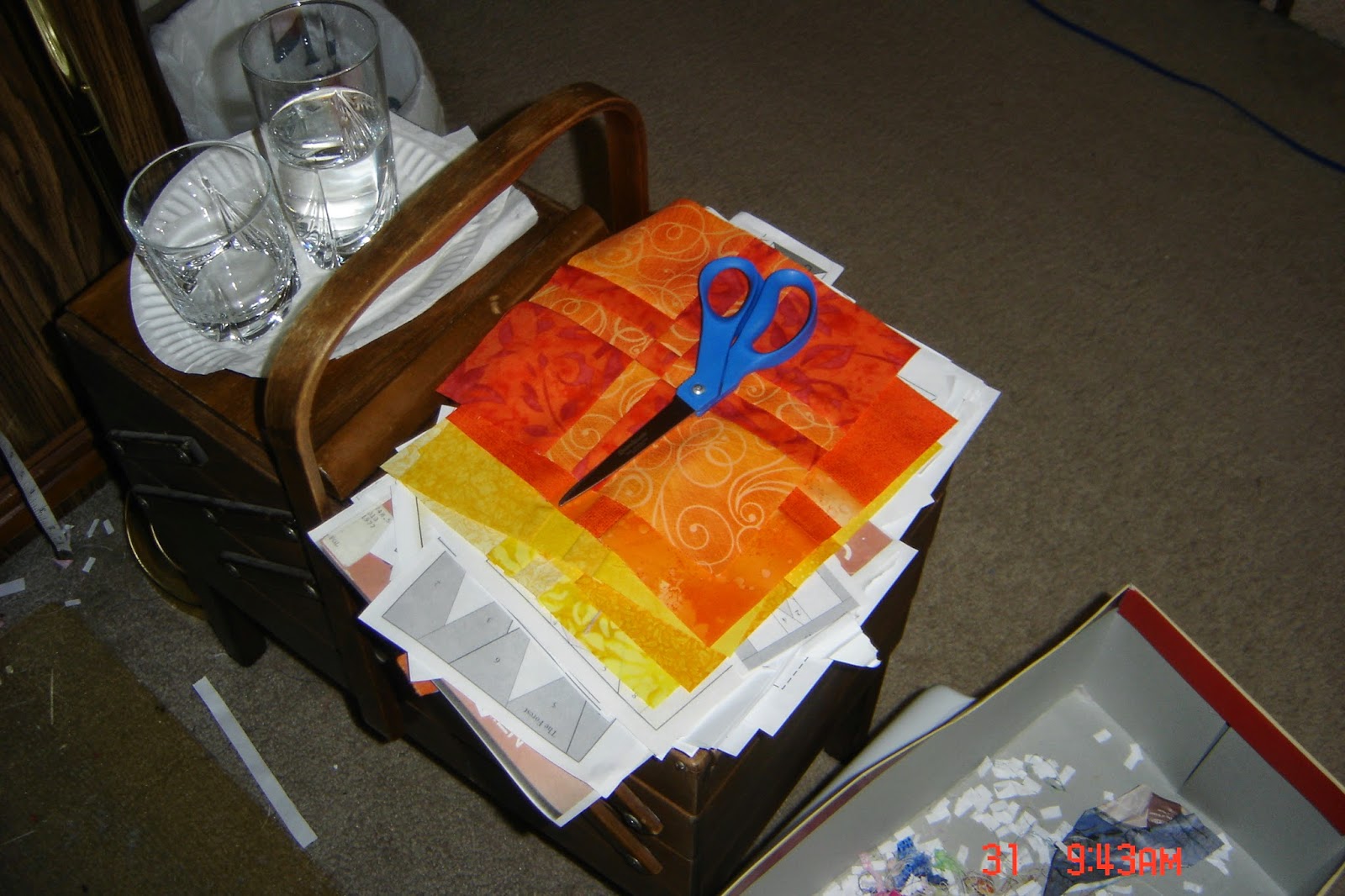 Waiting for placement.... maybe. Seems like we have plenty of orange and yellow already, so maybe not. (Those are water glasses... just so you know.) 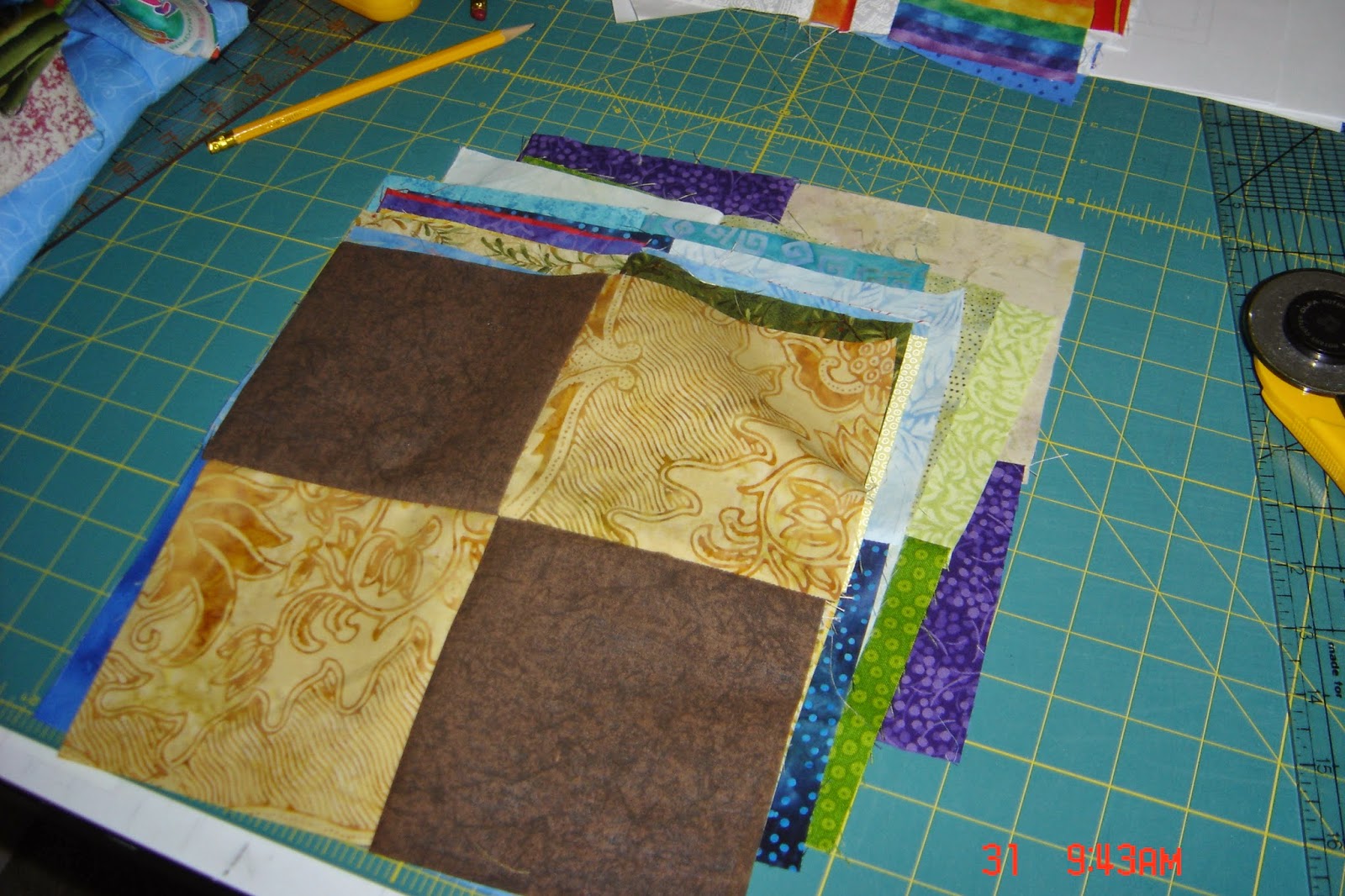 Waiting for the disappearing cuts... and then the resew. Love that beige print, don't you? (You know I don't like brown, but it goes great here. I do love my avocation.) 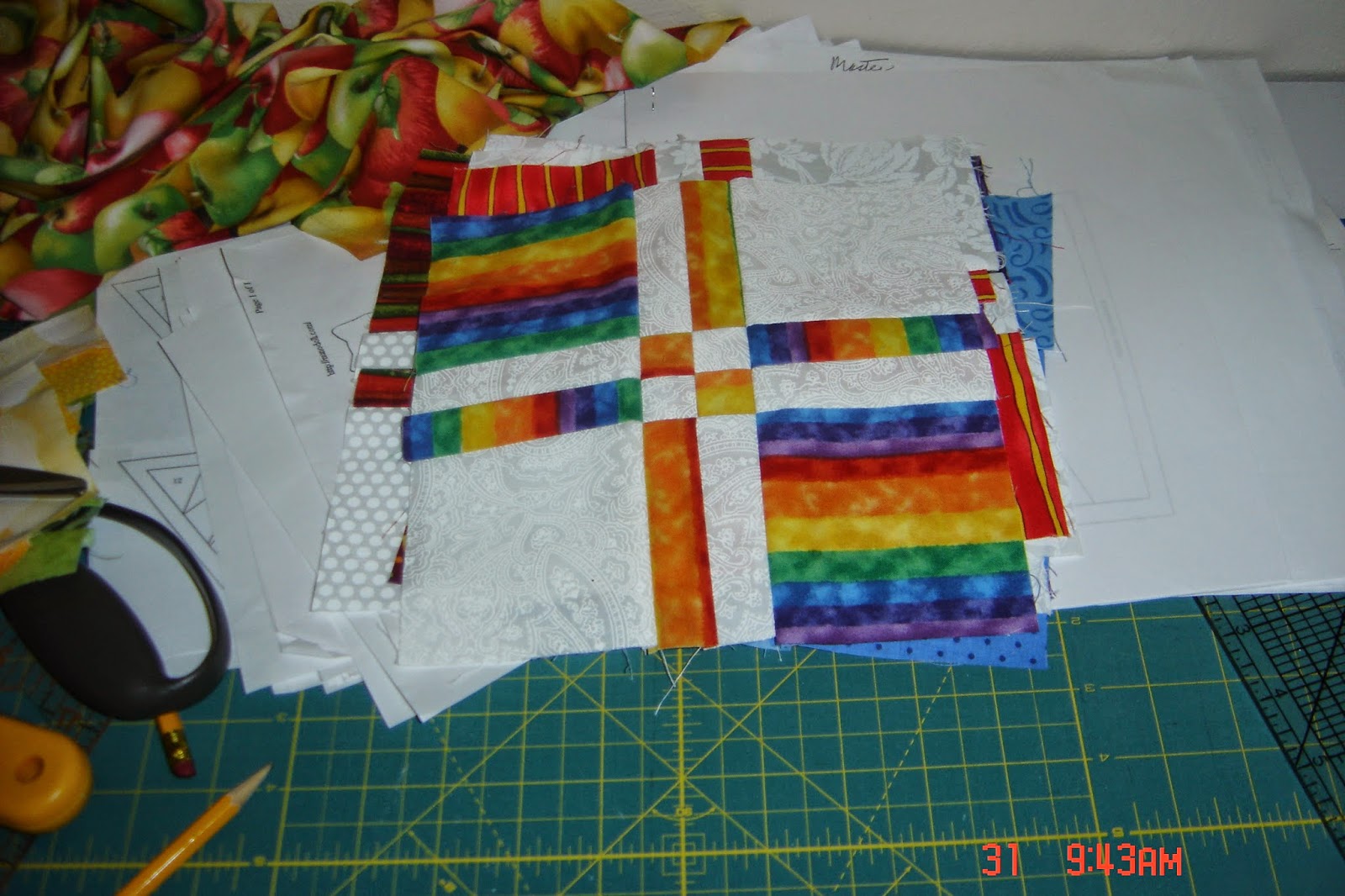 Waiting to be squared up. This pile has some really wacky prints and stripes - they have to get into the quilt.
So you can see we are still in a big mess of blocks everywhere around the sewing room. Maybe by tonight I'll be ready to sew it together as a flimsy. If you see anything that should be moved, please let me know.

Have a wonderful weekend.
Hugs,
Terri
Posted by Terri at 11:21 AM

Email ThisBlogThis!Share to TwitterShare to FacebookShare to Pinterest
Labels: D4

Thanks for leaving a comment. I love the feedback, and getting to know you.